Our take-away from this article may be quite different from that of the typical reader at the Economist. This article is of interest because it articulates an evolving trend with a reportedly growing number of donors. A new generation of donors are now hyper-focused on demonstrable outcomes and results. Great! Understanding the needs of donors is certainly one of the essential factors to solving the ever present funding puzzle for nonprofit organizations. And, without question nonprofit leaders must be prepared to respond to the changing desires and needs of their donors.

But we still call this fund raising, not fund counting. Nonprofit organizations have always been required to react to changes in the donor marketplace. Despite changing donors and changing donor needs, organizations must still engage in campaigns to seek out financial support. We are less concerned about the possible pitfalls identified in this article as it has always been incumbent upon the nonprofit organizations to engage their constituents in a discussion about the mission and merits of their work. If fundraising and donor relationships become more focused on the quantifiable outcomes of their work, we think good things will happen.

Lessons from business for charities 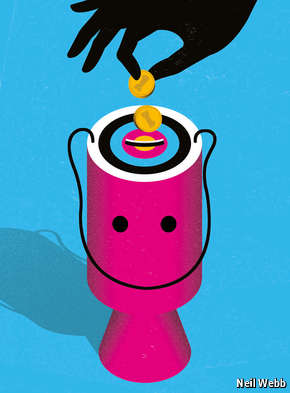 “WHAT charity will give me the biggest bang for my buck?” asks Elie Hassenfeld. In 2007 the former hedge-fund manager co-founded GiveWell, a non-profit organisation set up to answer that question for the growing number of donors who want to know how much good their cash will do before deciding which charity to entrust it to. GiveWell researches charities active in fields where there is strong evidence that great good can be done for a modest cost, such as cutting the incidence of malaria and treating children for parasites. The most effective are published in a list of “best buys”.

According to Alana Petraske, who advises charities and donors for Withers, a law firm, much of the new interest in such “impact-driven” philanthropy is from donors with business backgrounds who aim for the same efficiency in their giving as in their work. Bill Gross is a recent example. The billionaire bond investor has said that he will give his entire fortune away, and lauded GiveDirectly, a GiveWell top pick that makes no-strings cash grants to poor people in developing countries that he describes as “outperforming the market”.

Venture philanthropy, modelled on venture capitalism, offers a way to invest in charities that are testing new approaches to solving old problems. Some big donors, including the Gates Foundation and USAID, the American government’s aid agency, run competitions for innovative approaches, which are extended if they prove to be effective and efficient. They look for rigorous evaluation: almost half the projects USAID funds include “gold-standard” randomised controlled trials.

Small donors, too, are becoming more discerning in their giving. Together, their contributions vastly outweigh those of billionaire philanthropists and their foundations: a 2007 study estimated that American households gave at least $60 billion annually to charities focused on the needs of the poor. By comparison, the Gates Foundation made grants totalling $3.9 billion last year.

Members of Giving What We Can, an Oxford-based society, pledge to make regular donations right through their working lives to charities that alleviate poverty as efficiently as possible. Many are recent graduates on modest incomes. Using information provided by charities themselves, it calculates that the most effective health-focused charities do more than a thousand times as much good as the least effective, as measured in “quality-adjusted life-years”, a standard unit that combines survival and quality of life. Choosing the right charity thus matters at least as much as deciding how much to give to it.

That donors are paying more attention to the uses their money is being put to may seem an unalloyed good. But demanding proof of impact may push charities to focus on short-term outcomes, rather than more meaningful long-term measures of success. Worthy but risky projects such as pioneering medical research may be squeezed out. Others that do good work with particularly difficult groups, such as persistent young offenders, could go the same way. “What you don’t want is all charities gravitating towards the easier projects that guarantee high levels of success,” says Iona Joy of New Philanthropy Capital, a think-tank that advises charities.

Another potential pitfall, says Ms Joy, is that impact-minded donors may withdraw their support if charities admit to mistakes. That can push charities to seek to justify failures rather than learn from them. Though nearly three-quarters of British charities with an annual income of more than £10,000 ($15,500) say they have been trying harder than before to measure impact, just 5% say that they do so mainly to improve their service. More than half are trying to satisfy funders.

This is a missed opportunity. SolarAid, which won Google’s Global Impact Challenge in 2013, sells solar lamps that cost $10 and save families on average $70 on paraffin (kerosene) a year. In 2012 sales failed to grow as much in Malawi as elsewhere. Most potential customers, its research and impact unit found, could only afford a solar light straight after tobacco harvest, in May. Scheduling its sales visits to coincide with this period made the charity more cost-effective, says Kat Harrison, its director of research and impact, and helped it to reach more very poor people.

Donors often look for low overheads in the mistaken belief that this is a proxy for cost-effectiveness. But to solve new problems charities need discretionary cash for staff, research and infrastructure. Dasra, an Indian foundation, specifically encourages affluent donors to give charities money to be spent on administration. In 2010 it set up its first “giving circle” of three donors who collectively committed $600,000 over three years, to be used by a small charity to get better at managing its work and measuring its impact.

Educate Girls, the first charity supported by a giving circle, covers 10,000 schools in Rajasthan, India’s largest state. A preliminary evaluation by researchers at Michigan University suggests that it cuts girls’ drop-out rate by 5%. Smarinita Shetty, one of Dasra’s senior managers, compares the approach to that of private equity, which seeks to make businesses more valuable by improving their management. As charities are learning, if you want to do good, you have to do well.