This article from NPQ (Non Profit Quarterly) reminds development professionals, once again, that each donor to our organizations is unique.  They have unique perspectives and unique needs.  This research is helpful in further defining and understanding evolving preferences of broad ranges of constituents. 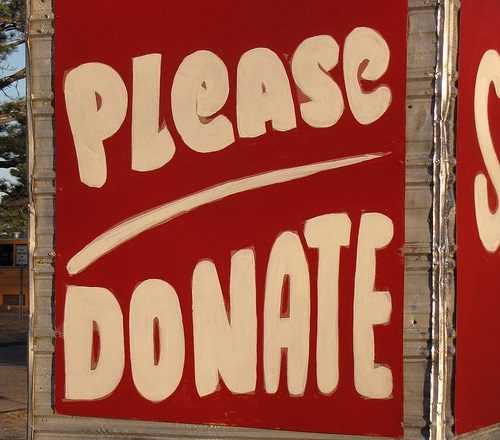 A study released today by software company Abila (formerly Sage Nonprofit Solutions) contrasts the ideas nonprofits have about how to engage donors with what donors say actually makes them feel engaged. Further, it looks at generational differences in the preferences of the donors.

One of the points made in the study is that when nonprofits segment donors for a variety of approaches, it is often around only one data point, and that this is less than fully effective. Of course, the company that commissioned the study helps nonprofits use data to get better fundraising results.

The two foci of the study combine to lead to a finding that makes good sense but perhaps needs more exploration by nonprofits: Different generations have different preferences, and there may be some worth in segmenting donors by age, or at least in offering enough approaches to donor engagement to provide an open and welcoming way in for donors of every age.

For instance, it is only millennials who give higher marks to volunteering than for giving in terms of what makes them feel most engaged. All three other generational groups said they felt most engaged when they gave money.  Boomers and “matures” are apparently more interested in updates than in participation in events or advocacy, which attract millennials and Gen Xers more readily.

Not surprisingly, the amounts given per individual go up with age, and reputation matters more with age, reinforcing the need to maintain the integrity of the organization as a major asset to be nurtured by all.

It is interesting that the least liked methods of fundraising are phone calls and canvassing, followed closely by text/SMS and social media. Of these four channels, social media had, by far the highest marks among millennials with 72 percent expressing approval (against 66 percent for Gen Xers, 38 percent for boomers and 21 percent for matures).

Surprisingly, the highest marks across the board were given to radio or TV ads and direct mail, followed by peer-to-peer fundraising: 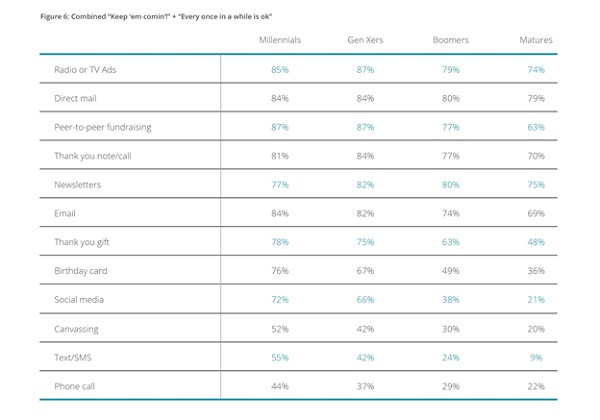 There are lots of valuable findings in the study, but one of the most useful may be a chart that contrasts how frequently donors want to be (or are willing to be) contacted through each channel against what nonprofits actually do. 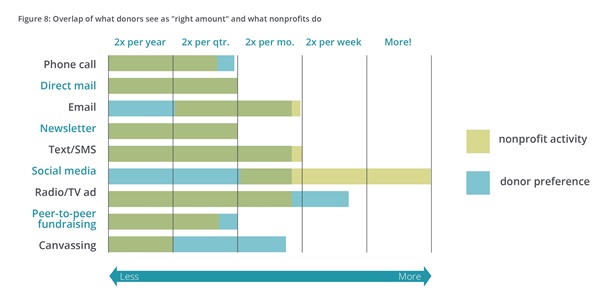 If you find the bar on canvassing a bit unbelievable, I did query that, and was told it is accurate.

The study posed questions to 1,263 donors across all four generations and 206 nonprofit professionals involved in decisions around donor communications and engagement at organizations with annual revenues ranging from $1–$49 million.—Ruth McCambridge