Since its founding in 1876, Grove City College, in Grove City, Pennsylvania, has committed itself to Christian principles and the highest academic standards. These ideals began in the heart of GCC’s founder Isaac Ketler, who was a student of Joseph Newton Pew. Pew, who was a teacher before later becoming highly successful in business, was elected as GCC’s first board president when it was reorganized as a nonprofit institution in 1895.

Since that time, Grove City College has distinguished itself by reaching families of modest means who desire a college that will strengthen their children’s spiritual and moral character.

Several years ago College administrators and faculty undertook the task of determining how best to enhance the learning process for Grove City College students. After months of study, the College community emerged with a clear understanding of the preparations necessary to meet the needs of future generations of students, and presented a plan to the Board of Trustees for an increase in scholarship endowment and physical plant improvements. 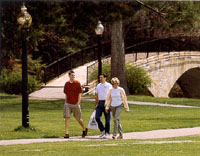 “We were excited about these goals,” recalls Dr. John Moore, past-president of Grove City College. “But at the same time, we also had to come to terms with the fact that we had never conducted a capital campaign like this before. This was new territory for us, and we knew that we would need some outside help.”Goettler Associates was brought in to assess what steps GCC must take for immediate, as well as ongoing fund-raising success. “Not only did we have to work with Grove City College to lay the foundation for a successful capital campaign,” comments Dr. Frank Oliver, of Goettler Associates, “we were also charged with the job of helping them build their development department from the ground up.”

“The firm was instrumental in helping us to recruit Tom Poppalardo, to the position of Vice President of Development,” Dr. Moore continues. “Through his own professional expertise and with the guidance of Goettler Associates, Tom has been instrumental running an ambitious capital campaign while also building an infrastructure for ongoing development.”

As a result of prudent planning and astounding leadership from the board and College family, the original campaign goal of $45 million was surpassed, and even exceeded its stretch goal of $60 million.

“It has been a challenging task, but the results speak for themselves,” Dr. Moore asserts. “Sometimes, you need to go outside for help. When you do, I encourage other organizations first to seek out an organization whose people are honest and forthcoming. Seek out an organization that is experienced, that knows the dynamics involved. Also, their people must sincerely listen, and understand your needs and your point of view.”